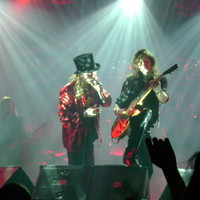 He said get out of here nobody wants you here
Yoy smashed his head and the man died
And there's a murmur loud
From the appearing crowd
Searching for motives and reasons why
Now take a look at yourself an you'll see
What you are in the eyes of the world
You didn't want it but now he is dead
And you're on the run from the law
Chorus - You're a murderer in every town
murderer to the whole world
murderer you're on the run
murderer you'll have to kill... again
And like an animal which escaped from the cage
They're hunting you over their holy land
Traps waiting everywhere you fall in deep despair
Darkness and night your only friends
https://www.coveralia.com/letras/murderer-helloween.php
One day the chase will be over for you
And you'll find your own peace in the end
Some day you will find a sanctuary
Death !... but so long my friend...
Chorus
Look for a safe place where no one will find you
And try to escpe from the law
Wherever you are there's a killer behind you
Wanting to get you for sure
To lose the fear that one day he will get out
Be faster and kill him and run
Now you don't have to fear him no more
But in his place another headhunter will come
... run away !!!