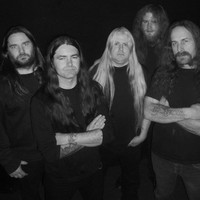 Opened my veins yesterday and poured in the twilight
with its dead promises. Nothing makes sense in an imaginary
world that no one can touch. In the strange hours I dream of evenings
under moonrise and of fashioned ideals before they could turn
and go, had seeped their treachery into my widowed summers. Is this my lover, this face of death? I recoil to
the unmoving view.

The soft, voiceless emotions escape the exhausted frame to assail
tomorrows empty heaven. The dawn, with its dull smell, fills my nostrils
and the stench of a burning sun separates the hope from silent lips.

There is something painful in the first spring bud of life, it tears at the insides and claws at the doors of
tenderness
that riseth in black forms from an obsolete graveyard.
https://www.coveralia.com/letras/narcissistic-funeral--live--mourning-beloveth.php

To cast my eyes on the horrors you have created or to turn and gaze
at the clouds? It remains cold and dark and the painless times revel in
a distant memory that only seem to trespass when the night is clear.

The wordless world bleeds to the point of despair and the failed attempts to move end in quiet massacres. The
lurid calm is a stalking mountain that eludes the perceptive eye but eventually overwhelms to send us cowering.