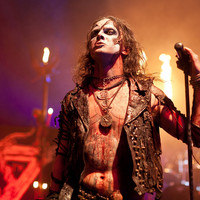 Ascending now, on a course by will assigned
To illuminate the darkness of the mind
A fire of organic divine

The fire
The fire of power

A luminous procession through aeons of night
Ever onward 'neath the lodestar
Against the winds, against the law of our times
Kindlers 'of the flame, pilgrims of the dark

https://www.coveralia.com/letras/the-fire-of-power-watain.php
By fire
The fire of power

For thou hast said in thy heart, I will ascend into heaven
And exalt my throne above the stars; until seated upon the
Mount of gods, in the uttermost north

On a mount overlooks the known world
Stands a solitary man
Silent in the storm, with his bow in hand
Once a barren desert, now a sea of flames
And eventually but embers